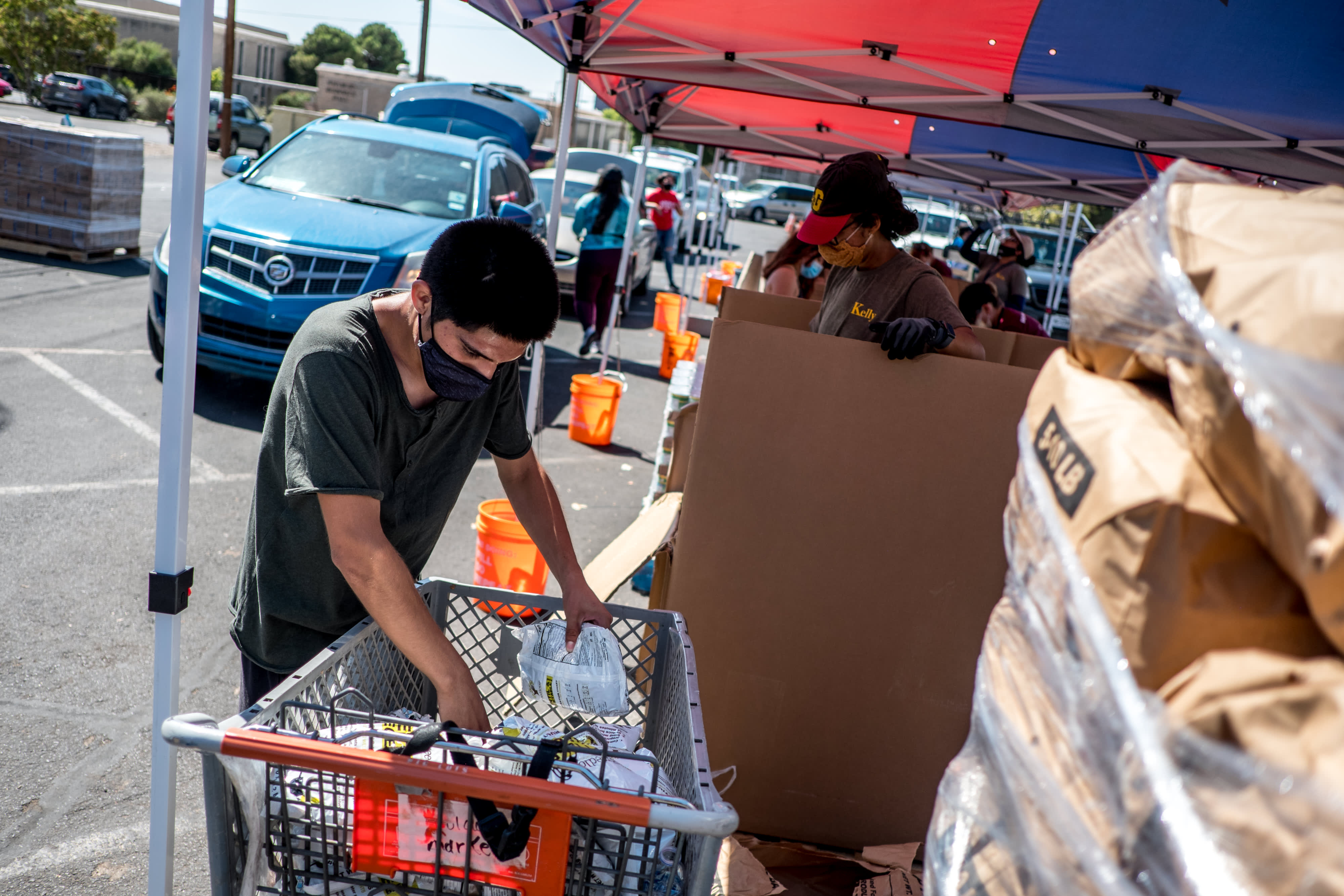 A Kelly Center for Hunger Relief volunteer sorts through food for distribution as residents in vehicles wait in line at a church in El Paso, Texas, on July 17.
Joel Angel Juarez/Bloomberg via Getty Images

Are you in the top 1%, 5% or 10% of the U.S. income and wealth scale? If you are, congratulations on being rich and economically successful. Good for you too for not being a big part of our current economic challenges. You’re protected from the headwinds affecting the other 90% of your fellow citizens.

It’s easy to hate the rich for all that they have and all that you don’t, but the rich aren’t the problem.

Since the financial crisis of 2008, the Federal Reserve and federal government have engineered economic rescue efforts consisting of large deficit spending and liquidity injections totaling trillions of dollars. This drenching downpour of cash successfully staved off economic collapse and deeper financial tragedies. The government gets high marks for disaster aversion.

But, while the deficit spending and interest-rate suppression kept the ship afloat, they didn’t do much to get the ship moving very well, or improve the lots of the steerage passengers and crew. Yes, the first-class passengers are fine, were fine, and have almost always been fine. They have all been assigned a lifeboat. But the ship has not been safely steered clear from icebergs.

The U.S. economy is the largest in the world, and nearly 70% of it is driven by consumer spending. Billionaires are a fraction of the top 1%, and they literally can’t spend all their money. There is so much money in so few hands at the very top that they simply can’t spend enough of it to make a difference to an economy as large as America’s. The problem is that the poor and middle class don’t have enough money.

By the fourth quarter of 2019, there were encouraging signs.

Unemployment was below 4% and there were more job openings than people seeking jobs. When employers compete to get workers, they have to pay more for them. Wage gains, while inflationary, are a crucial step in getting more money into the hands of a larger number of Americans.

This additional money in more pockets creates demand for more stuff and requires increased manufacturing and hiring and results in economic expansion. This is a great formula for economic renaissance. But this hasn’t happened. It hasn’t happened because Milton Friedman was wrong.

Widely acknowledged as one of the greatest economists ever, Friedman said “inflation is always and everywhere a monetary phenomenon in the sense that it is and can be produced only by a more rapid increase in the quantity of money than in output.” We have had more than 10 years of rapidly and steadily increasing money supply, but we haven’t had any meaningful inflation.

Therefore, Farr’s addendum to Friedman (I can’t believe I just wrote that) is that unless the increase of money leads to an increase in demand, there is no inflation (or for that matter, significant economic growth.)

The government’s monetary and fiscal programs that saved the economy from collapse are precisely those that led to the ever-increasing wealth gap. The middle class and poor are stuck and struggling while the wealthy become wealthier.

The popular political response is to blame and tax the rich. It appeals to the great American paradox of dreaming to be rich while simultaneously hating everyone who already is. The rich aren’t the problem, and it’s not their fault. This is government policy that began on a good path, accomplished meaningful and important goals, and lost its way.

The policy is the problem, and it needs to change.

Most of the money that has been spent just this year resulted in temporary relief for those who received it and very little in terms of sustained or long-term effect. The relief was needed, but without ongoing stimulus to spur growth, the impacts fade quickly.

Had a portion of the government funding been spent on repairing all of the bridges and highways in the U.S., people would have been hired by the hundreds of thousands; concrete, steel and other materials would have been purchased; and those resulting structures would have increased commerce and added to economic growth. The same can be said for longer-term investments such as energy infrastructure, education, and research and development.

I’m not arguing against relief; I’m arguing that stimulus that doesn’t spur long term growth isn’t stimulus at all. Politicians on both sides of the aisle need to better understand what is keeping the ship afloat, versus what will get it moving again.

The poor and middle class are the crux of the American economic dilemma, and until we are able to sustainably increase their lot, our economy will continue to suffer.

Taxing the rich may feel good, but it won’t raise enough money to dent this economic ill. I’m not arguing against higher taxes for the rich, but I am looking at the numbers.

Taxes on the wealthy could certainly be higher. Taxing the rich will provide more funds to pay for the government and to pay for interest on the government’s debt. But unless those monies are deployed such that they can create jobs and growth, the problem of the trapped poor and middle class will remain unchanged and may worsen.

Until employment and wages increase, the U.S. economy will remain at best bogged down and at worst digging a deeper hole for all of us, our children and grandchildren.